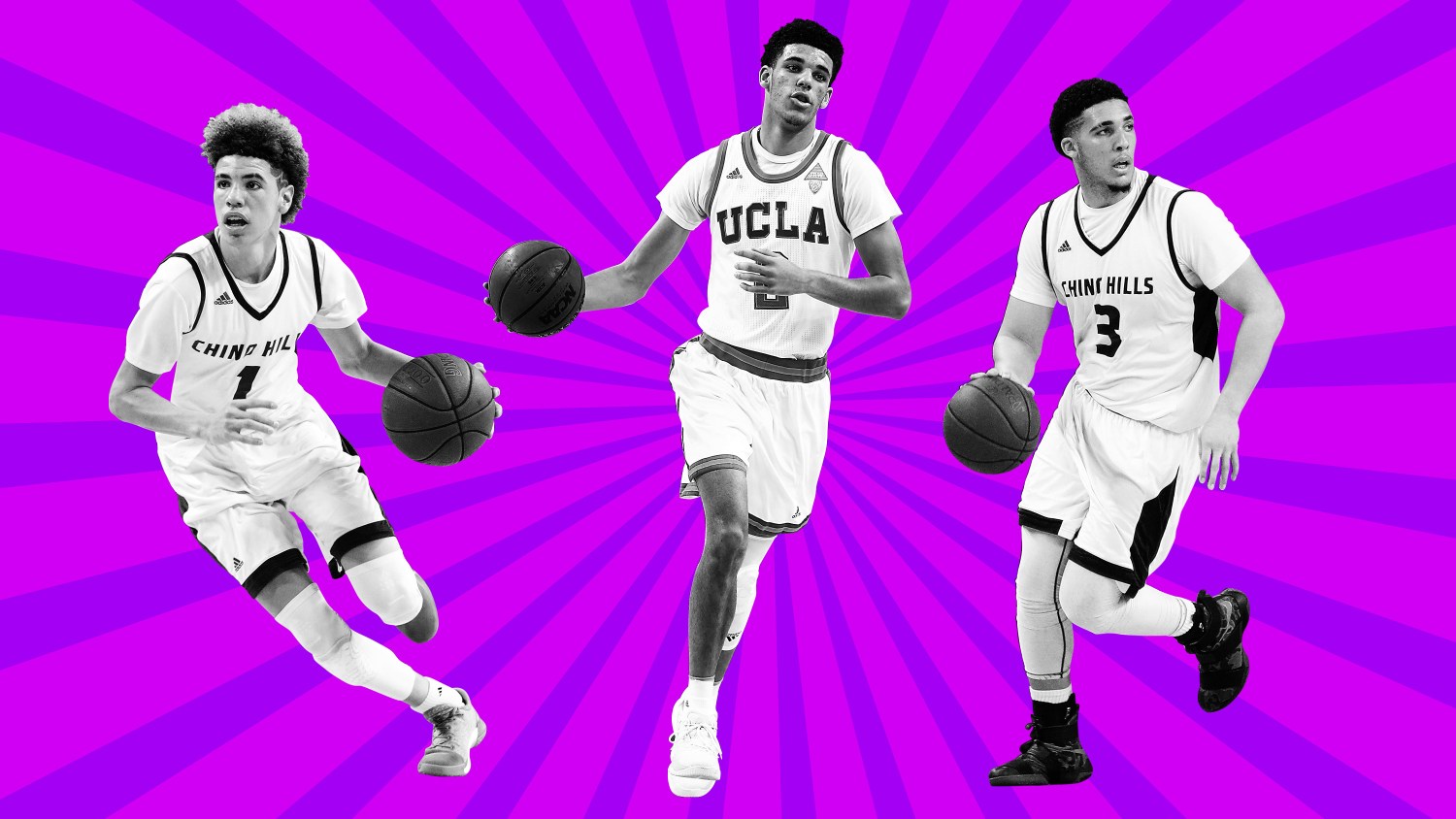 Eventually, Lonzo, LiAngelo and LaMelo will have to take care of business on the court

Lonzo Ball, UCLA freshman and flash: a 6-feet-6 point guard who reflects his father’s hopes and hype. A man among boys in college who could be exposed as a boy among men in the NBA. Or, if he can grow stronger and raise his outside shooting to the level of his scintillating passing, he could become an enduring NBA star.

Whatever the 19-year-old Ball becomes, he must do it all under the watchful and sometimes reproachful eye of a voracious sports media, ready to spit him out even before it has chewed him up.

Meanwhile, Ball’s dad LaVar, will be closely watched, too. Like Lonzo, LaVar Ball has a lot at stake. The elder Ball walks the line between being a staunch advocate for Lonzo and his two younger basketball-playing brothers and making a bid for his own celebrity. With LaVar Ball’s every public statement, the question grows louder: Is LaVar Ball a huckster in a nation filthy with hucksters, especially in high places? Or is LaVar Ball a visionary, a prophet in a nation that too often ignores and ridicules its prophets before dispatching them to low places until they are vindicated by future events?

Of course, LaVar Ball sometimes talks as if he should be sitting on a milk crate outside a check-cashing place somewhere. He makes boasts that are as big as his 6-foot-8 frame and his ambitions for his sons. He says things that nobody believes and waves away doubters as if they were flies. For example, despite scoring just 2.2 points a game at Washington State nearly 30 years ago, Ball posits that in his prime he would have been able to take Michael Jordan, the greatest basketball player, one-on one. That’s the kind of boast that usually prompts responses on the street such as, “You [are] crazy.”

So far, the elder Ball has proposed that one of the sneaker companies ponies up $1 billion to eventually have LaVar’s three now-teenage sons wear its products. Sounds ridiculous.

But if Nike can sign Kevin Durant of the Golden State Warriors to a 10-year, $300 million sneaker contract, what might signing LaVar’s boys, especially if they are really balling in the NBA, be worth?

After all, the Ball boys could combine the appeal of star professional athletes and a boy band. Marketing possibilities for LaVar Ball’s three sons, whom the father already views as a family and a brand, would be staggering, if they can star in the NBA. So far, each of LaVar’s sons is off to a promising start: Lonzo, the Associated Press Pac-12 Player of the year, scored about 15 points a game at UCLA. And his two younger brothers, LiAngelo and LaMelo, UCLA commits and teammates at California’s Chino Hills High School, have each scored more than 70 points in a high school game.

LaVar Ball follows in the footsteps of Joe Jackson, Richard Williams and Earl Woods, black men who had a dream for their children. And Williams and Woods worked like crazy to make those dreams come true: The Williams sisters, the best American tennis players of their era, have combined to win 30 Grand Slam Singles titles. With 14 victories in the majors, Tiger Woods, has been the most dominant American golfer of his era, his current struggles notwithstanding.

And they worked like crazy to make those dreams come true.

Still, like Williams (Serena and Venus) and Woods (Tiger Woods), some sports and entertainment pundits have accused Ball of being more dime-store Svengali than parent; they have found Ball guilty of being bad for his children and their futures: a damning rebuke.

Who knows what the Ball Boys will need from their father (and their mother Tina, a middle-school teacher) to go beyond realizing their hoop dreams to becoming solid, responsible men, a task that’s often made more difficult by fame and fortune? If you don’t believe me, just ask Allen Iverson.

As time goes on, we’ll learn much more about LaVar Ball and his sons than the elder’s soundbites and the sons’ hoops highlights have revealed. Perhaps the family’s biggest wins and losses won’t occur on the basketball court.

LaVar Ball trusts his sons to win as NBA basketball players and as hot commodities for sports consumers always hungry for the next new thing. If his sons trust LaVar Ball, and he dedicates his life to honoring that trust, they will all be winners.